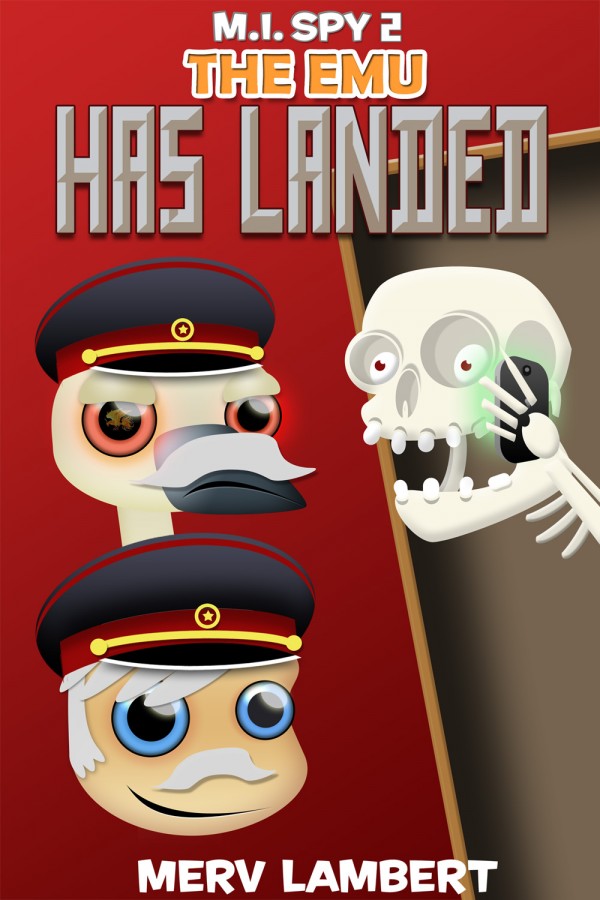 The Emu has Landed

This fantastic new addition to the Colin the Librarian series contains eight exciting stories.
Read how the magic phoenix bookmark causes Colin together with his invisible emu friend to be dropped by parachute behind enemy lines, how he encounters a skeleton in a cupboard with an active mobile phone in its hand, and how the sinister British spymaster F for Frank involves him in a series of extremely dangerous missions by way of the Arctic Circle and the Russian Revolution of 1919. The actions of M the emu continue to be bold, inventive and frequently hilarious.

The Emu Has Landed
Behind enemy lines Colin and M sabotage the secret trial of a radio-controlled tank. By impersonating Adolf Hitler Colin rescues a captured Polish airman, who turns out to be the grandfather of one of his best friends.

Pond Life
Colin and his family and M the emu find themselves in Mexico with Spymaster F for Frank. They rescue Yvon yet again and capture a runaway British traitor. However, the story does not end there.

Pond Life 2
An adventure in Brazil in which Frank and Yvon literally discover a skeleton in a cupboard. It leads them to the villainous Popov, whom Colin ‘sends into space’. Olivia puts her foot down and insists the magic phoenix bookmark allows her family a proper holiday this time.

An Emu on Ice
An adventure in northern Greenland. Colin, Frank, Braine and Perkins plus M after a skidoo race foil Russian plans to claim a steep rocky island. Then, posing as Stalin, Colin boards a Russian submarine to rescue Yvon yet again. He gives orders for the submarine to return home. Mission accomplished!

The Bridge of Spies
In this adventure Colin and M thwart the plans of the evil Stasi chief Colonel Schickelgruber. First they rescue Yvon (yet again!), and then save a British scientist as she crosses the Glienicke Bridge to freedom, but the magic phoenix bookmark does not return Colin and company home yet.

The Berlin Wall Game
Colin and co. once more foil Colonel Schickelgruber. By means of an attack on one of the watchtowers of the Berlin Wall during a snowstorm they smuggle two fugitives into the safety of the American controlled zone of the city. As usual M is on his best form, though not on his best behaviour, as he cannot resist German sausages!

The Gnome of Zurich
During a teddy bear festival in the city of Zurich Colin and M together with Frank and Co. thwart a plot by the Deputy Police Commissioner to steal important information from a bank vault. Yvon disguises himself as a giant teddy bear, and M causes all sorts of fireworks.

Red Emu
In 1917 Moscow Colin and M rescue Yvon’s grandparents, and M causes chaos at the Lubyanka Prison. As Lenin, the revolutionary leader makes a speech in Red Square, he is mimicked by an emu, who eventually provides F for Frank and his agents with some unique souvenirs.

Be the first to review “The Emu has Landed” Cancel reply